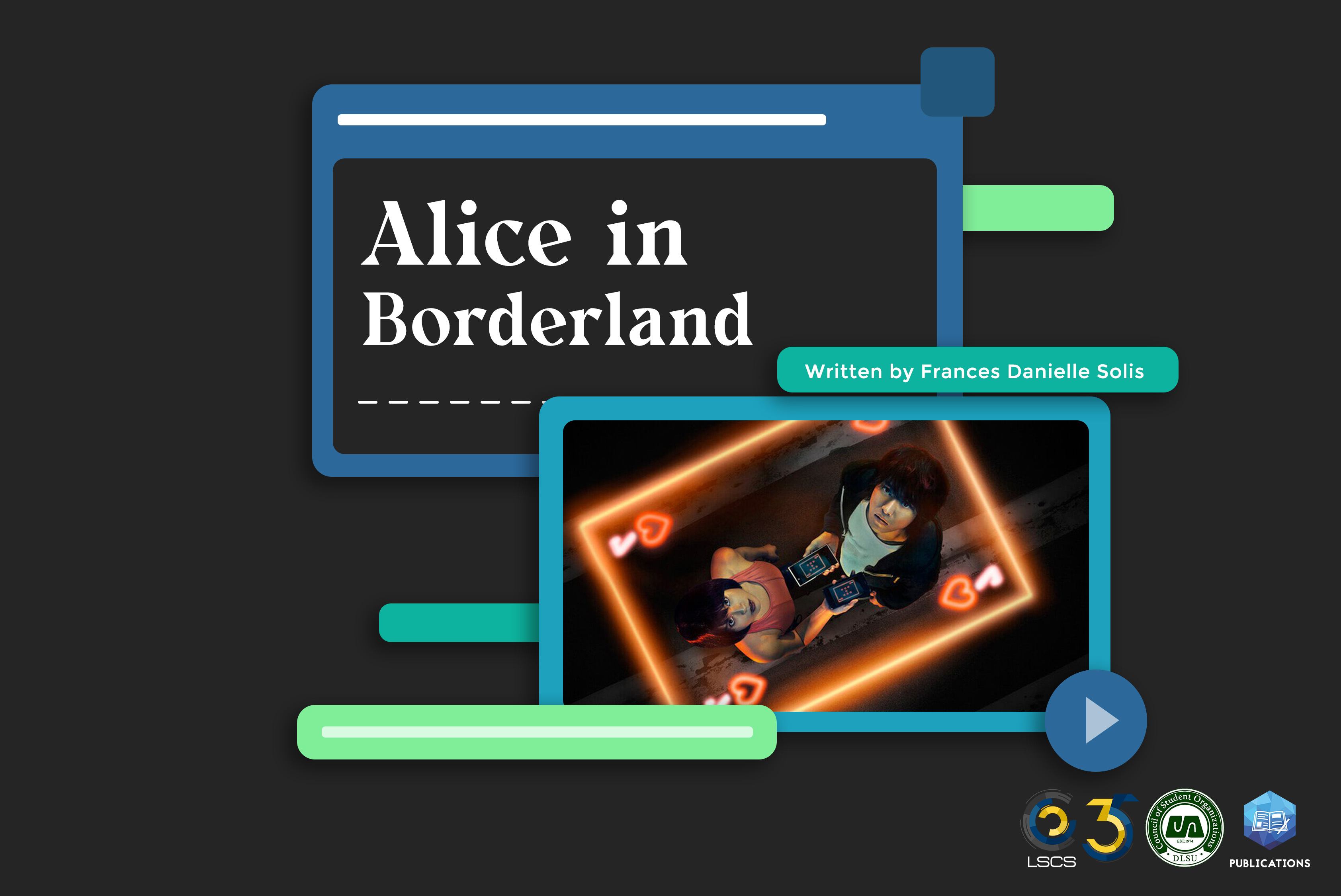 After seeing fireworks while running in the streets, Arisu and his friends run into a subway restroom stall only to see that all of Tokyo is inhabited and without power. At night they are forced to participate in life threatening games to acquire visas to extend their stay and their lives. If left to expire, players are terminated via laser beam from the sky. With a name like “Alice in Borderland”, one would think of the beloved classic “Alice in Wonderland”. The series references this with the use of playing cards, the unusual new world, and the characters’ names. Alice, the White Rabbit, and the Cheshire Cat are Arisu, Usagi, and Chishiya, respectively for both their personalities and similar sounding names or their meaning. There are more characters with these name and character connections, but that is for watchers to observe.

The highly acclaimed Netflix series, “Alice in Borderland”, became very popular worldwide. It made the Top 10 list in nearly 40 countries/territories which includes Malaysia, Hong Kong, Germany, France, and the Philippines. The series is an adaptation of Aso Haro’s manga of the same name that ran from 2010 - 2016. Sato Shinsuke, the director, also directed the movie adaptations of Death Note: Light up the New World, Bleach, and Kingdom and will direct the upcoming Kingdom sequel. This is actually the second adaptation of the manga with it having an anime series created in 2014. It only had 3 episodes which left fans wanting more.

This dark and suspenseful series is able to pull on heartstrings with its down to earth moments and the relatability to the characters’ personalities. Having these mundane people with everyday lives be thrusted into an unusual situation makes viewers sympathize and connect with them. Arisu and Usagi's actors, Yamakazi Kento and Tsichiya Tao, are two of Japan's household names and great choices for the leading roles of “Alice in Borderland”. They and the rest of the cast are able to convey the characters in such a way that makes viewers truly feel for them. Their excellent skills coincide with the cinematography and soundtrack to keep the mood and feel of each scene.

The show was incredibly faithful to the manga series, given a few changes to update its technology and fit it to a live action setting. One of the biggest changes was the first game Arisu and his friends played, which was completely redone. In the adaptation, the game was set in a GM Building which burned the players if they either went into the wrong room or stayed in their current room for too long. On the other hand, this originally took place in a carnival which shot players with a given amount of flaming arrows if they answered questions incorrectly. This could be because it would’ve been more difficult, production wise, to recreate the scene. The change of setting and game mechanics gives the feel of the characters being in Tokyo and a small taste of what is to come of their new lives in Borderland.

Other changes are more subtle, like how their characters are portrayed and their backstories. Arisu and his friends are likely in their early to mid 20’s in the series while they were graduating high school students in the manga. They were originally written as immature and ignorant but with the age change, they were portrayed as more mature and complex. Arisu was the author’s self-insert to who he was at the age of 20, someone who was indecisive in nature. This also caused him to create Usagi who is independent, the opposite of Arisu and his ally in the Borderlands. He also felt like a different character from his manga counterpart, portrayed as a selfless guy who wants everyone to survive but he was more selfish in the manga. They also added some parts to Karube and Chota’s -Arisu’s friends- backstory which gave watchers more reason to care for them.

The first scene where we see our three protagonists are in front of the Shibuya station. Originally, they were supposed to meet in a Starbucks but the complexity of shooting in a glass covered set was too difficult. This was then set in Shibuya Scramble Crossing, which is one of the busiest intersections in Tokyo. This was filmed in a massive open set in Ashikaga city which is over 100 km away from the actual crossing. In this scene the ticket gate, the public restroom, and the road were the only set pieces not created with CGI. They even recreated the shadow of the Tokyo Building that would usually loom over the location. Other great feats of the production’s CGI was a tiger in the 5th episode. This work was done by Indian animation and VFX studio Anibrain and was supervised by Dutch animator, Erik-Jan De Boer, Academy Award winner for his work in creating the tiger in “Life of Pi”. The overall visual effects utilized teams from Japan, India, USA, and Singapore.

Overall, “Alice in Borderland” is a must watch for it’s compelling storyline and interesting characters. Spotting the connections between the show and “Alice in Wonderland” is also a little treat for observant viewers. Vigilant watchers noticed a teaser in one of the final episode’s buildings hinting that a second season would be released in 2021. Netflix has confirmed this speculation but has not stated a release date. Old and new fans of the series are now looking forward to the upcoming sequel.