MSI x Evangelion e:Project: Behind the Scenes of Getting in that Machine 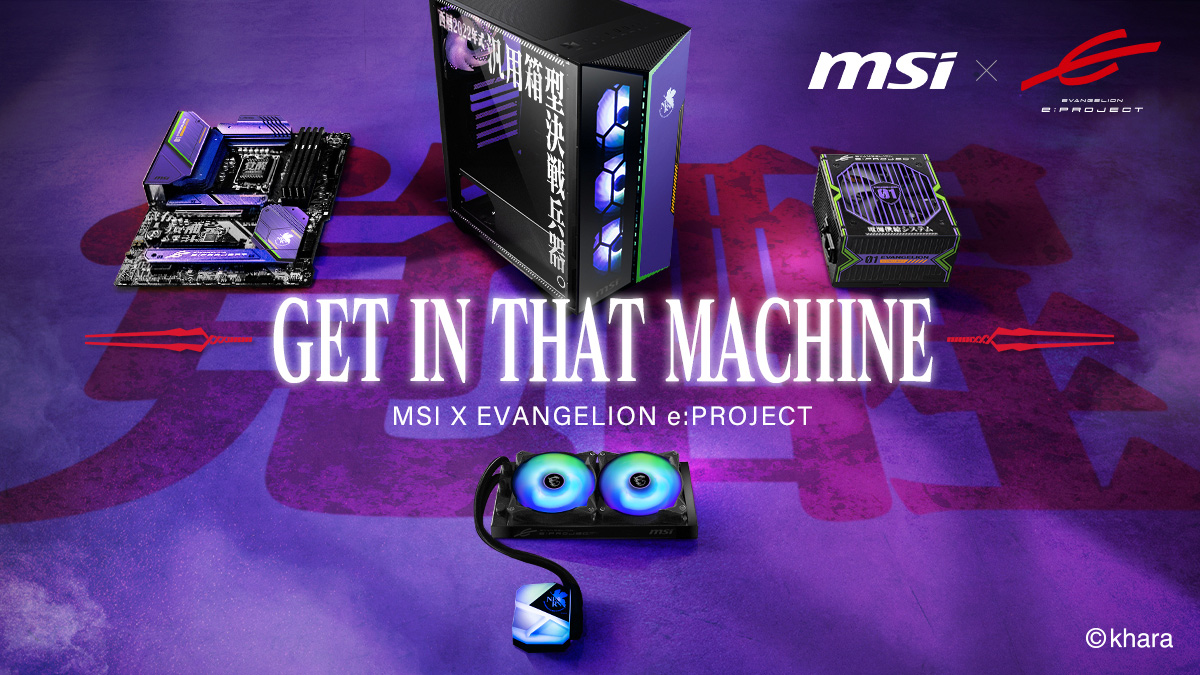 After successfully delivering premium gaming experiences to all gamers with peripherals, PC parts, and PCs over the years, MSI now joins forces with EVANGELION e:PROJECT to create something exciting! It’s time to GET IN THAT MACHINE.

We’re proud to bring you a collection that gamers and anime fans will love – a series of PC components blending gaming and building-sized mechas.

When and how did the MSI X EVANGELION e:PROJECT Come to Life?

The animated EVANGELION: 3.0+1.0 THRICE UPON A TIME movie (the fourth and final installment of the Rebuild of Evangelion series) released in 2021 and enjoyed a global streaming premiere on Amazon Prime Video in August of the same year.

Soon after release, it briskly climbed popularity charts (both in Japan and outside it) – breaking box office records one after the other. In fact, it is now the highest-grossing film of the franchise as well as the second highest-grossing Japanese movie of all time.

After the movie released, we’ve noticed that the fan-made art that incorporated Evangelion colors onto MSI products like monitors and PC builds on the forum and go viral through social channels, which is known that the desire of fans for co-branded of EVANGELION and gaming products. Meanwhile, it was also displayed at streaming platforms, becaused of its popularity , it gave us the perfect opportunity to team up with EVANGELION e:Project (the brand behind the Rebuild of Evangelion series) to gift something to both PC gamers and anime fans.

So, we decided to bring this dream to fruition as a fun, collaborative project!

The EVANGELION e: PROJECT is an esports brand created around the world view of the new Rebuild of EVANGELION (also known as ヱヴァンゲリヲン新劇場版 or EVANGELION: New Theatrical Version) series. It focuses on designing and launching a selection of EVA-themed high-performance gaming peripherals and PC components.

An EVANGELION battle scene does have quite a bit in common with the highly competitive esports scene. You work together as a team or go at it solo against everyone else to take down the enemy and finish your mission! EVANGELION e:Project aims to capture this mindset – offering gamers a chance to create a unique, gorgeous EVA-themed setup that’ll help them fight their online battles.

EVANGELION is a well-known anime, not only in Asia, but also in North America and Latin America regions, especially for the audience that grew up in the 90s. The retelling of the original anime has refreshed all those fond memories in the hearts of true EVANGELION fans.

As one of the most iconic mechas in the entire anime, the “EVA-01 TEST TYPE” has a special place in fans’ hearts’ with its bright purple and green color scheme. So, we knew we simply had to go all-in on Purple and Green!

We’re fortunate that many in the MSI Creative Design teams are also super fans of EVANGELION – ensuring that every design they create comes from a place of genuine appreciation. As fans, they remember sitting at their PC to watch the Neon Genesis EVANGELION anime. Today, they love the fact that they could meaningfully contribute to the design of EVA-themed products.

The MSI X EVANGELION e:PROJECT Collection is a four-product set that shines in classic purple and green inspired by the “EVA-01 TEST TYPE”:

We adopted the Matisse EB font, EVANGELION’s font across the board, to ensure we don’t miss a single detail on the MSI MAG B660 TOMAHAWK EVA e-Project motherboard. You’ll find phrases like “同步率400%” (Sync up 400%) and “覺醒” (awaking) tucked away next to the CPU socket. It plays on the idea that your CPU and the motherboard are now connected, and your PC is ready to go!

We also enlarged the famed “NERV logo” and placed it on the heatsink so EVANGELION fans can show it off through the tempered glass side panel on their EVA-themed MSI PC case (detailed next). You’ll also find small stickers with EVANGELION elements in the box to pepper your case’s front with them or stick them onto your motherboard where you see fit.

As for the PC case, we incorporated a litany of EVANGELION gems into the design. The EVANGELION fans can find the slogan “汎用箱型決戰兵器” (decisive weapon) on the side of the case. After all, your gaming PC is your decisive weapon online! The words like “第一種戰閥配置” displayed on the case are an extension of the motherboard design – ensuring cohesion in the final EVA build.

In the production phase, we had to use quite a bit of purple across several EVA-themed products. Although this seems very straightforward, it was one of the more challenging parts of the project.

First, we had to ensure excellent color saturation. To enhance saturation even over larger surface areas, we had to use double-layer printing technology to stack layers.

Second, different products use different primary materials, and colors on one material don’t look the same on another. What’s more, the iconic “EVA-01 TEST TYPE” purple is a unique color that’s not easy to source. However, we knew we just had to get it right!

After several rounds of Pantone color matching on different materials and quite a bit of back-and-forth with the EVANGELION e:PROJECT team to ensure that the color matched the EVANGELION official spec, we finally got precisely what we wanted.

How did you choose the products that would be included in this collaboration?

Fans who love EVA are likely to have a passion for mechanical and electronic devices. That’s why we chose to focus on PC components for DIY users as a first step. Furthermore, this time we’ve devoted all our attention to mainstream products that make them more accessible to all gamers worldwide. This allows more fans to build their dream EVA-themed PC while also ensuring that the resulting gaming PC is more than capable of handling esports titles and modern games without a hitch.

Whether you’re an avid gamer, an EVANGELION fan, or both, this is an excellent opportunity to build the ultimate gaming PC inspired by the EVA-01 TEST TYPE!

Gamers who can’t wait to bring home the MSI X EVANGELION e:PROJECT Collection can seize the opportunity to purchase these parts at a local MSI retailer. Please refer to the campaign page for detailed information.

MSI has collaborated with Intel and Kingston to assemble the exclusive EVANGELION e:PROJECT PC Build, where the winner walks away with that entire Gaming PC! Remember to join the sweepstakes before 12th June and throw your hat into the mix. Best of Luck!